skip to main | skip to sidebar

Oh my, I hope all of you are doing super today.

I don't have a featured artist this week but I do have a featured blog. My friend Mary, who authors many blogs about womans issues, faeries and the one that is the star today Maiden, Mother and Crone. Click on the link for a great way to start the week.

Mary is a dear soul who cares and shares. This morning's post made me laught so deeply that I knew I just couldn't keep it to myself but must share it with you. Go tell Mary hi.

Posted by OmaLindasOldeBaggsandStuftShirts at 8:43 AM 5 comments

I know you are probably asking why is the Olde Bagg recommending The Olde Dame? Because she rocks and I know you are going to love her work......if you haven't already. 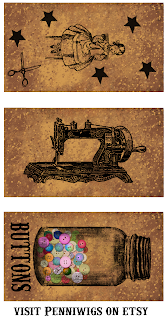 The amount of freebies that the kind and wonderful Penniwig has to offer you on her blog, her old blog site and also on her Picasa and Photobucket accounts as well as with every listing she has on her Etsy account is unbelieveable. What she creates for her Etsy shop is wonderful.
She is just a sharing soul, with a great talent for creating the interesting, the unusual and prim do hickeys and thing-a-bobs for any and all holidays, occasions, and sometimes just because. She also has tutorials on the creation of paper embellishments as well, lovely paper roses etc.
Ms. Penni, was the first person to call me a donkey fren, has a wicked sense of humor, foretells future events and lives life her own way.

Gawd, I love her.

I also love the way she describes herself:
"I'm not a Southern Beauty,
I'm not an Eastern rose;
I'm just a lil' Western Gal
With freckles on her nose."

Take some time to go to visit all the wonderful hidey hole places that Ms. Penni has made for herself and for you. I'm sure you will find lots to admire, repurpose and most especially purchase for yourself.

﻿
Posted by OmaLindasOldeBaggsandStuftShirts at 10:11 AM 2 comments

And you will certainly know why I picked the lovely and talented Sharon at Plumrose Lane to be the featured artist of the moment.

Sharon's work is a you can see fabulous and fabulous. She not only does blogs, but facebook headers, and all manner of computering pretties either custom of if you go to her Etsy shop she has ready to wear er use too. And the woman does jewelry and lovely giftees as well.

I have worked with Sharon several times and everytime, since I am a computer dum dum, she has been kind understanding and patient........as well as a sweetheart.

It would be my recommendation that you check out all the wonders she can preform and then on top of all that..............she is having a sponsored giveaway that is to die for. So go, be gone, fly to see the magick of Plumrose Lane and the artistry of Sharon.
Posted by OmaLindasOldeBaggsandStuftShirts at 12:25 PM 7 comments

A year ago, I received a lovely albeit strange gift from someone I barely knew. I had been following a blog called Martha and Jane for some time and commented often on the antics of these characters. A story about stuffed animals made by Valerie Weberpal and others. It featured two dolls and their play partners. The maker VW also made bedbug dolls and April and Helen, the real bloggers behind the story then began sending out bedbugs to unsuspecting but appreciative folks. We became BB Mom's. There have ended up being several generations of Bedbug.

My bedbugs is named Bopp. He is third generation in the makers line. I have posted about some of his adventures on both of my other blogs.....mostly on Ye Olde Crones Gazette. He and Ms. Baggs my wooden correspondent for the Gazette are friends. He has for several months now just been sidelined by lack of enthusiasm for either featuring him or being involved with the BB Mom's.

Well as with all good things.....the joy has gone out of mudsville and the group of folks who would chat, support and allow each others lunacy has gone silent for part of the group. And the reason? because of ego. Ain't it always the way????? One person gets to thinking that they have an idea that everyone else needs to (must) ascribe to. And when the others in the group aren't automatons, or worse, don't feel like it is a priority in their lives to drop everything else and do this persons bidding, they (because they are an Artiste) go ahead and do the non-participants parts without their permisssion. And then when some in the group leave because they have been bullied and not been told the complete truth, the remainders who have been true friends with each other for so long.......feel betrayed. So they resort to paranoid ugliness about the ones who left.

Me, I just hid under a rock for a few days, looked out to see the unfriendlies gathering and left the group too.

Bopp and I are both sad to say good-bye to "a used to be fun" artistic sharing group. So sad.

Which just goes to show you....be careful how you treat everyone, all the time because you can't take back what hurts someone else. Even an "I'm sorry, sometimes just doesn't undo the pain caused".

Nice Matters or as the famous running back Earl Campbell's grandma used to say, "it takes a lot more effort to be ugly to folks and a lot less to be kind."

Not trying to be preachy, just saying taking others feelings into consideration is always the best way to be a life artist, not just someone who makes art. Have a super week.
Posted by OmaLindasOldeBaggsandStuftShirts at 10:33 AM 4 comments

I would love for you to come and visit me.

I am an art and people lover and want to introduce you to my friends.